Many ‘Mumbaikars’ would be surprised to know that at one time, post

It was way back in 1893 that train services were made  public from this neighborhood.

Furthermore, this station was situated  in an intimidating stone building located in close proximity to Sasson Docks. It was eventually to make way for expansion of ‘Maximum City’ that this railway station was destroyed. 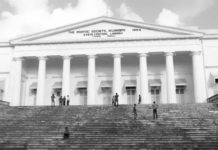 Jogger’s Park, Why is it so popular?