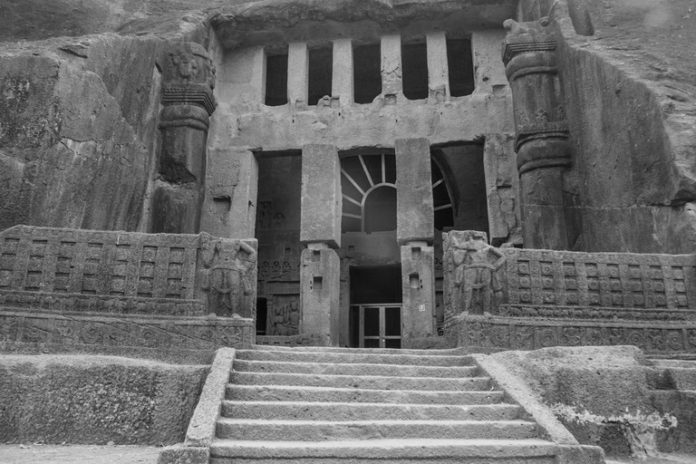 Situated on top of a hill in the city of Mumbai is the popular Kanheri Caves. Considered to be an important landmark in the “City of Dreams” these caves are located in close proximity to the Sanjay Gandhi National Park. Comprising of Buddhist sculptures, carvings, paintings, and inscriptions it is also a popular tourist spot in the city. And so, here is presenting a few facts explaining in details the significant features of these caves, which in turn makes it not only a tourist hotspot but also a landmark in “maximum city”.

a. The “basic” background and architecture of the Kanheri Caves:

Carved out of “rocks” these caves is said to have been constructed anywhere in between the 1st century to the 10th century BC. The word “Kanheri” has been derived from the Sanskrit word “Krishnagiri” which when literally translated means “Black Mountain”. Furthermore, all the caves (about 109 in total) comprise of a stone plinth that served as a bed. They also consist of a hall which contains a “stupa” (Buddhist shrine), and is surrounded by huge stone pillars. In addition, this cave complex also comprises of a complex water system which basically consists of “channels cut from rock”.  It is said that these caves were basically built as Buddhist viharas, which were meant mainly for studying, living, and meditating. Apparently, the larger caves were mainly used as a place of worship which were known as “chaityas”, and consisted of Buddhist sculptures and reliefs. Historical facts also suggest that these magnificent caves were used as university during the reign of Mauryan and Kushan dynasties respectively.

b. Inscriptions found at the Kanheri Caves:

“About 51 inscriptions that are legible and 26 epigraphs” is what one can observe on the walls of all the caves in this complex. These inscriptions are basically written using the Brahmi and the Devanagari script while, 3 Pahlavi epigraphs can be seen in Cave number 90. A few other inscriptions at these caves include one that describes the marriage of King Vashistiputra belonging to the Satavahana dynasty as well as the other which describes the Traikutaka dynasty. In addition, inscriptions in caves no 81 and caves no 3 describing yet another ruler of the Satavahana dynasty known as “Yajna Sri Satakarni” are also famous.

The complex basically comprises of about 109 caves in totality. However, there are a few caves that are important, and must be visited by tourists. They are as follows:

“Great Chaitya” is how the largest and most popular cave in the complex is also known as. Constructed between the 2nd and 6th century BC, this cave comprising of two Buddha statues about 7 meters in height are placed at the entrance of this cave. Furthermore, the main hall of this cave is about 28 meters long and 13 meters wide comprising of a high stupa (about 5 meters in height) at one end. This hall also consists of 34 columns. In addition, an inscription describing Yajna Sri Satakarni, a king belonging to the Satavahana dynasty is also present at this cave.

“The durbar or Assembly Hall” is what this cave essentially represents. It comprises of a Buddhist statue which has been placed at the center. Additionally, this cave also comprises of a section especially created for monks. It is also considered to one of the “largest” cave in the complex along with the Chaitya cave.

Comprising of “Elephanta type pillars” this cave comprises of hall door that is surrounded by mouldings. Furthermore, the wall at this cave consists of paintings of Buddha. The statute of Lord Buddha seated as well as that of Padmapani (a bodhisattva consisting of 11 heads) can be seen at this cave.

“Buddha paintings” is basically what Cave Number 34 comprises of. In addition, this cave also possesses an extremely evolved and intricate water supply system. It is due to the presence of an ancient “mandala” that cave number 90 is extremely popular. This cave is also renowned for a Buddha statue seated on the “Padmasana” (lotus throne) which is surrounded by two figures possessing snake hoods. Finally, Cave Number 67 is popular for a relief that illustrates the Avalokitesvara (a bodhisattva) which is basically surrounded by two females.

d. How to reach the Kanheri Caves:

The closest railway stations located in close proximity to these caves are Borivali and Malad. In addition, a number of local BEST buses are also available that connect to this popular spots.

e. Things to do at the Kanheri Caves:

There are several eateries available outside the premise of these caves worth visiting. They include: Greens Veg Restaurant, Cascade, Bay View Restaurant and Aura Restaurant.  Furthermore, vendors selling items such as nuts, juices, cotton candies, freshly baked crisps and the local Chaats can also be seen outside the complex of these caves.

Having visited the caves myself (during my school days) and developed fond memories, I can confidently state that if you intend to understand the rich Buddhist culture in the city of Mumbai then “Kanheri” is certainly a spot that must be visited.

7 Best Books based on Mumbai City

The ‘Shahenshah’ Of Bollywood