“A wonderful assortment of books” is what one observes on entering a bookstore known as “Kitab Khana” situated in South Mumbai. Now, being a book lover I had in the past brought a few books from this bookstall, and was extremely happy reading them. It was then on one rather cool December afternoon in Mumbai that I decided to shop for a stimulating book from this store (obviously based on my more than satisfactory past experience) located in the Flora Fountain Area.  As I entered this shop and began browsing through a few book sections, it occurred to me that an article about this store would make for a great read for this website. And so, I approached the senior manager of this store named Sanjeev Kamath (as per guidance provided by a man at the cash counter) and got chatting with him. Here is presenting a few facts about “Kitab Khana” that I was able to extract from the extremely pleasant thirty minute chat I had with Kamath.

a. Basic “background” of Kitab Khana:

“This store belongs to the Somaiya Family” said Kamath when asked about the owners. He further added that “It was initially established by Shantilal Somaiya, and is currently managed by his son Sameer and daughter-in-law Amrita Somaiya”. Continuing further he affirmatively stated that “It was 1st March 2011 on the auspicious festival of Mahashivratri that Kitab Khana was officially inaugurated”.

b. The “Book” collection available at Kitab Khana:

“Books belonging to all subjects must be kept at the store” has been the basic instruction given by the owners according to Kamath. And so, it is not surprising to see this store filled with books on a wide range of topics. In terms of the type of genres kept at Kitab Khana the manager stated that “We keep a large variety which includes History and Social Sciences, Young Adult Fiction, Architectural Design, Management/Self Help, Sport, Cinema, Classic Fiction, Coffee Table Book, Cooking, and Health to name a few”. He also added that “We also have an exclusive section that caters only to kids”. On probing further, he revealed that “A section dedicated only for books on Mumbai (written literature as well illustrations) is also available here, and is one of our USP’s (Unique Selling Point)”.

Situated in a corner of this bookshop is a small “magazine stall”. On asking Kamath about the type of magazines sold, he rather candidly replied claiming that the only reason magazines were sold at this store is because the owners wanted it. Looking around the stall I could see that foreign magazines such as Esquire, Vanity Fair, Monocle etc, as well as Indian such as Outlook, Business India, Open etc are sold over here. In addition, what also caught my eye was that an Esquire copy was expensively priced at Rs 800. And so I asked the manager whether such magazines are actually brought by customers, to which he responded stating “Yes, actually many buy such magazines because people living in and around the Fountain area are usually rich, and cost does not matter to them”.

d. The “price” of books at Kitab Khana:

“Above Rs 1000 to below Rs 500” is the maximum to minimum pricing range for books available at this bookstore. However, in the words of Mr. Kamath, the unique feature in terms of costing at Kitab Khana is that on every book brought by the customer there is a 20% discount. It is therefore out of sheer curiosity that I asked him, how this offer helps in the business, to which he replied that “By offering a discount on every book sold it encourages the customer to buy another, which without the offer would not be possible”. He further added that “This offer therefore helps in increasing sales, and eventually the turnover of our business”.

“Kitab Khana also organizes special events such as book launches” Mr. Kamath explained to me as our interesting conversation was approaching its climax. It was then to extract more information from this topic that I asked him whether there was any book launch that occurred at this store recently, to which he pondered and then answered by stating that “Rajdeep Sardesai’s recent book “Democracy’s XI” had its launch over here”. He also added that this bookstore also was part of the “mega book launch” held at the Opera House which saw cricketing stars Sachin Tendulkar, Sunil Gavaskar, and Mohammed Azharuddin grace the occasion as chief guests.

f. The “ambiance” and “coffee shop” at Kitab Khana:

“Snack as well as coffee” is what a stall called “Food For Thought” located in the corner of this store provides for. On probing the manager Kamath about what kind of snacks are served, he said that “Items such as Misal Pav, Vada Pav, Cakes, and Pasteries are served over here”. In terms of the ambiance, this bookstore provides for a “relaxed atmosphere” which is ideally suited for readers. Additionally, the presence of sufficient chairs at this store provides the book lover with option of “sitting and reading” and not just “buying”, which is great.

So, with the extremely friendly conversation with Kamath having ended I asked him about the future plans of the Kitab Khana management, to which he responded by stating that “There are no major plans except that through books in our store we intend to encourage reading as an habit in the younger generation”. And with that parting note of optimism I leave this store feeling enriched in my mind, body, and soul. 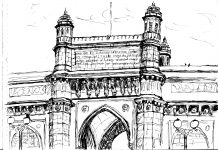