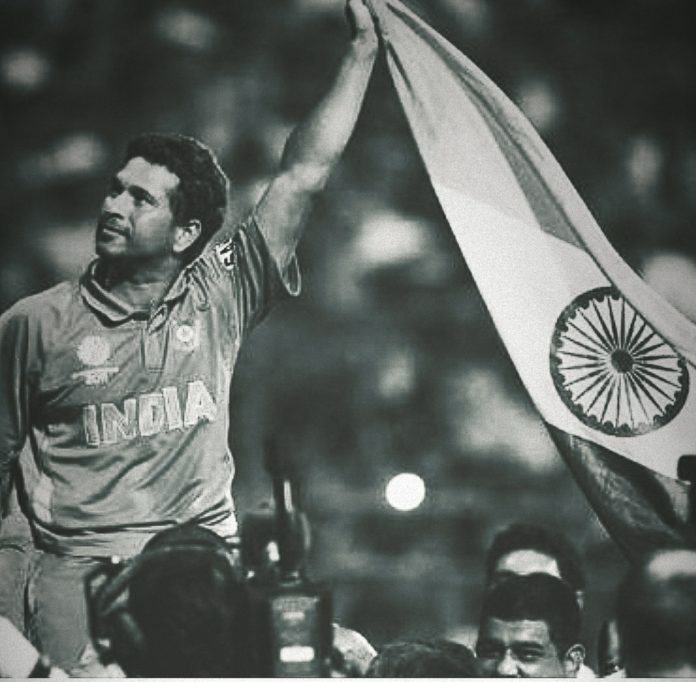 I am not the God of cricket, I make mistakes, God doesn’t “humbly retorted cricket megastar Sachin Ramesh Tendulkar when once asked whether he was divine? Now, apart from the huge ‘god gifted’ talent he possessed, what also stands out is his humility. It is therefore, this fusion of great ‘talent’ and ‘humility’ which makes this Mumbai born batsman an icon of India.

‘Rajapur Saraswat Brahmin’ is the community into which our little master was born. His father Ramesh was a renowned Marathi novelist, and Rajani his mother worked for an insurance company. Apparently, he was named after his father’s favourite music composer Sachin Dev Burman. He has two half brothers Nitin, and Ajit as well as a half sister Savita, who were children borne from Sachin’s father first marriage.  It was Ajit, who eventually spotted this great batsman’s natural talent, and played a major role in him becoming a great cricketer. He was coached by the great ‘Ramakant Achrekar’ at the famous Shivaji Park Maidan. Furthermore, he married a Gujarati pediatrician named Anjali Mehta. They have two children a son Arjun  and daughter Sara.

It was his coach Achrekar, who saw potential in him, and asked him to shift from Indian Education Society’s New English School in Bandra to Sharadashram in Dadar. This suggestion was given since the school was renowned for its cricketing facilities. It was at this school then that, Sachin began rapidly developing his batting skills. Such was his growth that word got around the cricketing circles in Mumbai that a ‘child prodigy’ had arrived. It was proven to be true, when during a Lord Harris Shield final, he and his childhood buddy Vinod Kambli scored 326 and 349 runs respectively in a record partnership of 664 runs against St Xavier High School. It was this partnership that eventually led to this prodigious talent earning a spot in the Mumbai Ranji, and then the stage was all set for him to be a part of The Indian cricket team.

It was during the 1989 tour to Pakistan that this prodigal son of Mumbai made his debut. He was given this opportunity due to a prolific Ranji season he had in 1988-89 scoring about 583 runs at an average 67.77. It was on 15th November 1989, that this talented batsman made his debut against Pakistan at the tender age of 16. However, he passed this ‘Baptism with Fire’ with flying colours scoring 215 runs at an average of 35.83. He followed this series with the New Zealand tour where he scored 117 runs at a 29.25 average.

4. The Birth Of The ‘Master Blaster’:

It was the 1990 and 1991-1992 tours of England and Australia that helped Sachin establish himself in the Indian cricket team.His scores of 119, 148, and 114 at Old Trafford, Sydney and Perth during these tours illustrated his class in  world cricket.However, it was during the New Zealand tour in 1994, when he was allowed to open the batting that the ‘Master Blaster’ version of his batting was unleashed. He scored a whirlwind 82 runs off 49 balls in his first innings as an opening batsman in One Day International (ODI). Thereafter, in both tests and one day internationals he peaked as a batsman from about 1994 to about 2003. It was post 2003, that he struggled with the now famous ‘tennis elbow’ injury which led to indifferent form till about 2008. It was under coaches John Wright (2000 to 2005) and Gary Kirsten (2008-2011) that he really flourished as batsman.

‘Outstanding’ is a word that best describes his record in the world cups. He played in 5 world cups and amassed about 2,278 runs at an average of 56.95, a record yet to be overtaken. He was adjudged as the man of the tournament in the ‘2003’ world cup for scoring 623 runs and taking two wickets. Furthermore, he also scored 485 runs in his last world cup of 2011 hosted in the subcontinent and India lifted the World Cup after 27 years at the Wankhede Stadium after beating Sri Lanka, a nostalgic moment for every Indian.

This great batsman having entertained people  around the world with brilliant batting, unfortunately served two unsuccessful terms as the captain of the Indian team. He was first made skipper in 1996 and then in 1999 for the tour down under. His winning percentages in tests and One Day Internationals in the two terms is an abysmal 16 and 31.50% respectively.

‘Packs a punch’ is how most cricket experts describe the shot making ability of this legendary batsman. He was essentially a bottom hand dominant player who loved to flick the quick bowlers of his pads as well as play the ball straight through the mid-on and mid-off region or even punch off the back foot through the covers. He was equally at ease with the spinners and loved to cut, pull, paddle sweep, or use feet to counter the spin. In addition, he was comfortable on both front and back foot, which explains his success abroad. He averaged 54.74 overseas as compared to 52.67 at home.

8. Legacy of God of Cricket:

9. What Does World Say About This Little Masterpiece:

Brian Lara the legendary Cricketer of West indies called Sachin “The Bradman Of Modern Era” a great nickname indeed. Dale Steyn the fast bowler of South Africa once said that “Sachin gave me the worst feeling as the bowler”.
Many other cricketers have said a lot in praise of this Little Masterpiece.A fun fact being that the bookies used to call Sachin as “Batku”.In honour of this legend his wax statue has been made in Madame Tussauds, London.

Having been a cricket buff and watched this great Indian produce some magnificent performances over the years, it would be safe to say that Sachin Tendulkar  came, saw, and conquered world cricket.