Mumbai is a city that is not only ‘financially’ but ‘culturally’ rich too. In terms of culture, this city is known for its ‘vibrant’ theater as well as for ‘Bollywood’ movies. Now, with regards to theater a new form known as ‘Stand Up Comedy’ has become extremely popular in this cosmopolitan city over the last decade or so. So, the question to be asked is, Which comedians have really made an impression on the audience? Here is then presenting a few comedians in Mumbai capable of making you laugh your guts out.

‘History of India’ and ‘Battle of Da Sexes’ are shows that have made Vir Das a popular stand up comedian in Mumbai. The fact that he is terrific in a genre as difficult as ‘political satire’, only illustrates his talent and intelligence. In addition, his humor is always in good taste and never below belt, which is what makes him popular with audiences from all around the city. It is therefore, a combination of sharp ‘intellect’ and superb ‘wit’, which makes Das one among many stand up comedians in the ‘City of Dreams’ capable of making you laugh your guts out.

‘Energetic’ is an adjective that best describes Tanmay Bhatt, one of Mumbai’s most popular stand up comedian. He possesses an extremely sharp sense of humor that is capable of striking a cord with the audience almost instantly. The fact that he is the founder of ‘All India Bakchod’ (one of the most followed Youtube channels in India) highlights not only his ‘talent’ but  ‘enterprise’ too. And so, it is this innate ability to understand the pulse of the audience, and deliver humor accordingly, which makes Bhatt one among many stand up comedians in the city capable of making you laugh your guts out.

‘The co-founder of AIB’ is how Gursimran Khamba a stand comedian in Mumbai is also popularly known as. Similar to his partner ‘Bhatt’, he too possesses an extremely sharp sense humor that connects quickly with audience. Our sardarji is Delhi born and has performed all around the world including Pakistan, and as you would expect enthralled everyone. It is therefore an unique ability in Khamba to use a sense of humor which is very relatable to today’s young audience, which makes him one among many stand up comedians in the city capable of making you laugh your guts out.

‘Witty’ is a word that best describes Aditi Mittal, a stand up comedian in Mumbai. In addition, she is also really pretty and possesses a charismatic personality. Having quit her corporate job in America, she has made a really big impact with her wit on audiences all around the city. The fact that she is a woman only goes to show that stand up comedy no longer falls in the male domain. It is then essentially her ‘humor’ combined with ‘charisma’, which makes Aditi one among many stand up comedians in the city capable of making you laugh your guts out.

‘Son of Abhish’ is a Youtube show that has made Mumbai stand up comedian Abhish Mathew extremely popular. In fact, he is so good that he has audiences in splits the moment he holds the mike and begins interacting with the audience. Apart from comedy of the stand up style he is also a musician. It is thus this fusion of great ‘sense of humor’ and ‘music’, which makes Abhish one among many stand up comedians in the city capable of making you laugh your guts out. 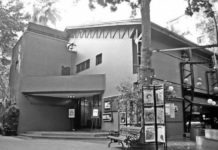 What makes Prithvi Theater a landmark of Mumbai City