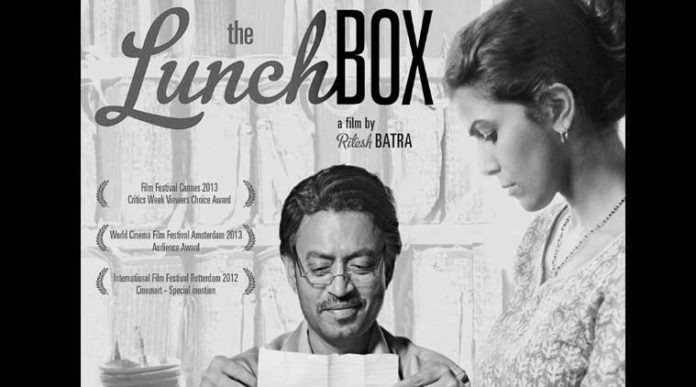 “The meeting of two lonely hearts via food” is the true essence of the sensitive Bollywood movie titled “The Lunchbox”. Directed by debutant Ritesh Batra, this movie comprises of Irrfan Khan and Nimrat Kaur in lead roles. Furthermore, this movie also beautifully captures the “melancholic” aspect of Mumbai city. And so, here is presenting an in depth analysis as to why this film titled “The Lunchbox” is a genuine Bollywood cult classic that must be watched.

a. The story/screenplay/editing of The Lunchbox:

The story set in the city of Mumbai is based on a widower Saajan Fernandes (Irrfan Khan) and a lonely housewife Illa (Nimrat Kaur). One day a lunchbox prepared by Illa for her husband is consumed by Saajan. Now, an empty lunchbox is returned back to Illa in the afternoon. However, it is only after her husband returns home in the evening that she realizes that the food she had prepared has been eaten by someone else. It is then acting on an advice of an elderly neighbour that the very next day she writes a note to this stranger along with the lunchbox. Thus begins, a daily exchange of notes between two lonely souls with the lunchbox serving as the medium. In addition, a subplot involving Saajan and a junior colleague named Sheikh (played brilliantly by Nawazuddin Siddiqui) also plays a key role in the story of this movie. The rest of the plot basically deals with whether or not the two protagonists meet up and reciprocate a deep love for each other.

The screenplay (written by Batra himself) has been extremely sensitively handled. Of note, is the brilliant use of the “lunchbox” as a tool to propel a love story between two lonely individuals situated in different parts of Mumbai City. The dialogues have been sensitively written by Batra with doses of intelligent humor adding charm to the overall story and screenplay. In terms of editing John F Lyons does a terrific job in pacing the narrative in such a way that the “melancholic” feel of the story (an essential feature of the story) is never lost.

b. The “performances” of the cast of The Lunchbox:

“Outstanding” would be the ideal word used to describe the performances of the entire star cast of the movie. The protagonists Irrfan Khan and Nimrat Kaur with truly brilliant performances bring to life characters that are lonely and depressed. Of note, is the magnificent use of body language by Irrfan Khan to play an old man with ease and grace. The support provided by the character of Sheikh played by Nawazuddin Siddiqui is equally brilliant. With excellent use of eyes and body language nuances Siddiqui once again shines through as a true “artist” and not just an “actor”.

c. The “cinematography” and “direction” of The Lunchbox:

“A melancholic atmosphere of Mumbai City” is what cinematographer Michael Simmonds captures beautifully through the camera. He also manages to visually show us beautifully the daily life in maximum city. Above all, the cameraman has also managed to capture magnificently the “melancholy that surrounds the loneliness” suffered by the two protagonists.

However, the true credit for the brilliance of this movie must go to director Ritesh Batra. Having written the story himself (which is a definite advantage) he manages to capture the “depressive” atmosphere that surrounds the protagonists magnificently. Above all, he also manages to extract some world class performances from Irrfan Khan, Nimrat Kaur, and Nawazuddin Siddiqui, and credit for that must also go to him.

Watching this movie several times in the past few years reminds me of an old English idiom which states that “The way to a man’s heart is through his stomach”.

Some Intriguing Facts About Mumbai Railway