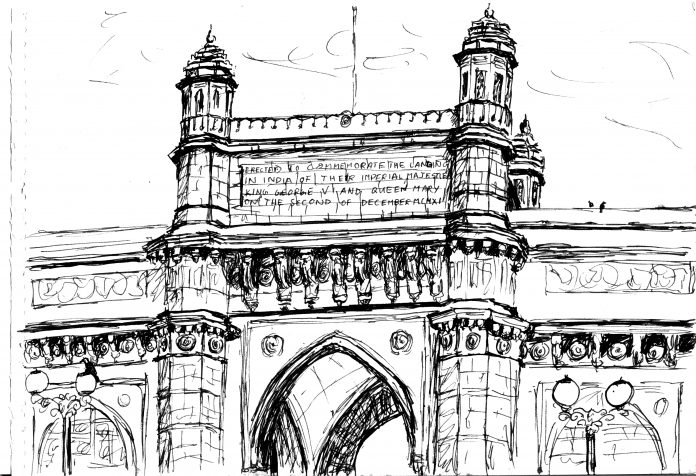 It was while walking alongside the Jehangir Art Gallery in South Mumbai a few days back, that I saw a couple of beautiful human portrait sketches displayed on the footpath nearby. On inquiring, I discovered that those sketches belonged to an artist named Rakesh Sinha. And so, I approached this unshaven and stoutly built man, and asked him to sketch my portrait. In response, he agreed to do it, charging me a small fee of Rs 200. Furthermore, sensing that he could make for a great feature story, I asked him for a small interview, to which he said yes. Here is then presenting a few facts about this extremely talented ‘Sketchwallah’ of Mumbai.

a. The basic background of ‘Sketchwallah’ of Mumbai:

‘Panvel’ replied Sinha when I asked him about where he resides. In addition, he also explained to me that ‘I have been sketching since I was a child’. When asked about his educational qualifications he tells me that “I have studied fine arts from the Banaras Hindu Vishwavidalaya”. As for his birthplace, he tells me that he hails from Bihar.

b. The ‘Work of Art’ sold by the ‘Sketchwallah’ of Mumbai’:

’16-17 years’ says Sinha modestly when I asked him about the number of years he has been in the sketching business. Our conversation then veers towards his business, and so I ask him about the services he provides. To which he states ‘I do caricatures, oil paintings, sketches, portraits, and water painting’. When I prod him further about his fees he says that “I take Rs 200 for a  live sketch, Rs 1000 for a photograph sketch, Rs 300 for a caricature, and Rs 1000 per square foot for oil paintings”.  As for work timings, Sinha comments “I begin my day around 11 am to 12 pm and end it at 7 pm”. He also adds that “I work in this area only when I do not have any assignments, and when I do have a lot then I work from home”.

c. The ‘Sketchwallah’ of Mumbai and his tryst with the Television and Film World:

‘I have also acted in television serial says Sinha during our conversation. When I ask him which ones he quips “In many of CID (longest running serial on Indian Television) episodes”. It is at this stage that curiosity gets the better of me, and I ask him about his role in them. To which he responds “I mostly played the role of a sketch artist”. With regards to films (especially Marathi) he says that his oil paintings have been used in many  movies. Furthermore, he adds that the recently released Marathi movie “Nude” directed by Ravi Jadhav contains a number of paintings that are based in oil made by him.

As our interesting conversation approached its climax Sinha says, ‘I wanted to be in an art director in films, yet I became an artist, which proves that in life whatever happens by chance is always for the best”. And with that profound quote, I bid goodbye to this talented artist, and move on in search of more such fascinating stories hidden within the rich culture of ‘MAXIMUM CITY’.

Marine Lines, Why Is It A Popular South Mumbai Locality