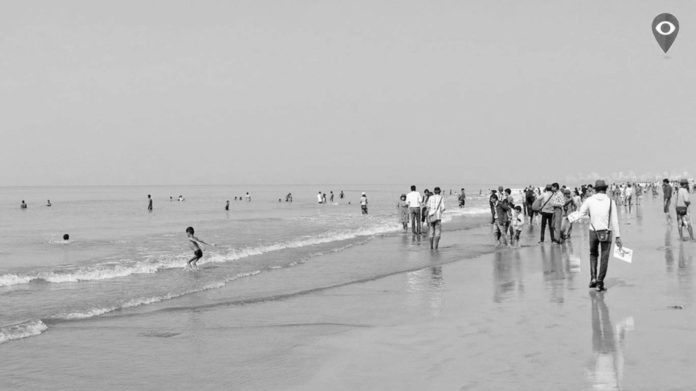 “Six million” is the approximate estimate of tourists that visit the city of Mumbai annually. The main reason behind this “bustling” city being the “hub” of tourists is the presence of a number of travel hotspots worth visiting. One such touristic spot situated in Mumbai popular with travelers within the country is the beach. Now, there are quite a few beaches available in the city. However, only a few of them are famous among tourists. So, here is presenting a list of top 6 beaches in the “City that never sleeps”.

“One of the most frequently visited in India” is what Juhu Beach located in Mumbai City is renowned for. Situated at a distance of 18 km from the center of the city, this beach is surrounded by the Arabian Sea. This beach is known for “food stalls” that provide popular Mumbai street food such as bhel puri, pani puri, shev puri etc. Furthermore, a paid horse carriage ride is available at this beach which is extremely popular with tourists. In addition, the festival of Ganesh Chaturthi is celebrated in a grand way at this beach with a large number of devotees immersing the Lord Ganesh idol into the adjoining Sea.

Located in close proximity to the suburb Juhu, is the Versova Beach. Situated in a neighbourhood known as Versova, this beach serves as “home” to the local fishing community known as “Koli”. Furthermore, this beach comprises of a number of huge rocks that serves as a “buffer” against strong waves that arrive during the high tide. In addition, at the northern end of this beach lies an area known as “Rock Beach”, which is visited by many tourists since it is extremely pristine. Unfortunately, in recent years this beach has gained notoriety for being extremely unclean, with apparently 2 million kilograms of waste being collected during a cleanup drive organized by the UNEP (United National Environmental Program).

Comprising of an Indian Navy base INS Hamla at one of its end, is a beach known as Aksa. Located in the Malwani region in Malad, this beach is considered to be an extremely popular weekend getaway spot especially for people belonging to the northern suburbs of Mumbai city. Furthermore, this beach is known to provide for magnificent views of the “setting sun”. In addition, a number of private cottages and hotels are situated in close proximity to this beach. About 15,000 tourists are estimated to visit this beach annually during the weekend, a statistic that confirms its popularity in Mumbai city.

Considered to be “one of the most popular tourist spot” in Mumbai city is the Chowpatty Beach. Located along the famous Marine Drive in the Girgaon area, this beach serves as a major spot in the city where the idols of Lord Ganesh are immersed during the Ganesh Chaturthi festival. In addition, this beach also is the site where the mythological theater “Ramleela” is performed beginning during the festival of Navratri, and culminating in Dusshera with the burning of the effigy of evil King of Lanka Ravana. Furthermore, this beach is also known for a few stalls that sell roasted corn. The beautiful “Nariman Point” skyline is situated in close proximity to this beach, and serves as a beautiful background.

“Clean and crowded” would be the best way to describe Gorai Beach situated in the suburb of Borivali.  Comprising of a number of “cottages and hotels” this beach is an extremely popular picnic spot. Furthermore, this beach provides for a paid “camel ride” which is enjoyed by tourists. In addition,   this beach is also known for festivals such as “Holi” i.e. festival of colour and Ganesh Chaturthi which is celebrated with great panache over here. Since this beach is located in an isolated spot it also serves as an ideal “lovers point”.

Situated in northern Mumbai in a small hamlet is the pristine Manori Beach. Comprising of an atmosphere similar to Goa, this beach is known for a number of shacks and villas constructed using typical Spanish designs. Furthermore, since this beach can be reached by road using the Bhayander and Dahisar Check Naka route it serves as an ideal weekend getaway especially for people living up north of Mumbai city. In addition, this beach provides for magnificent views of the “setting sun”.

In conclusion, it would be safe to say that if you intend to have some fun under “sun and sand” in the city of Mumbai, then the beaches mentioned above must be visited.